How Groupon and Button Won the “Most Innovative” Performance Marketing Award

As the top-rated retail app, Groupon’s rise among mobile users has been exponential in recent years. Despite 70% of Groupon transactions occurring on a mobile device, the Groupon International Performance Channel was under-indexing compared to the wider company and were not taking full advantage of mobile opportunities. With apps converting significantly better than mobile web (4x better according to Criteo), Groupon knew it needed to find a better way to offer customers a more seamless journey from publisher apps to the Groupon app.

That’s where Button came into play. As an early adopter into the Button Marketplace, Groupon unlocked the ability to scale more partnerships on mobile, while enabling a better, more targeted user experience that drives into the app experience without losing affiliation.

It’s worth highlighting that this applied to both new and existing partnerships. For instance, one existing partnership with cashback app Quidco led to significant success for Groupon in the UK, maximizing placement and driving users seamlessly to purchase in-app. With Button, Groupon was able to see conversion rates as high as 34%, significantly increasing overall spending and engagement in the Groupon app.

On April 24, the Performance Marketing Award’s revealed Button and Groupon as the winners for the best marketing innovation award. In light of this, Button and Groupon put together a case study highlighting exactly how we won. Read on to learn how Groupon innovated in the performance marketing space and how you can, too.

There’s no doubt that consumers are increasingly using their smartphones and mobile devices within just about every aspect of their daily lives. Booking a vacation, managing work expenses, getting to and from your lunch meeting, and everything in between, there’s likely an app or mobile experience that can be used. Retail mobile commerce sales in the UK are expected to hit £61.55 billion, making up more than half of total retail ecommerce sales and continuously growing. Worldwide, mobile commerce sales topped $1.3 trillion in 2017.

When it comes to ecommerce/desktop retail, the performance marketing channel has been a significant driver of this growth, making up roughly 20% of all commerce on desktop. However, this success has not translated to mobile, where performance partnerships make up less than 1%. Mobile has presented many unique challenges to the performance space, which traditional teams were not equipped to handle: with mobile websites, different mobile devices, and the addition of mobile apps — many new dimensions exist when it comes to affiliation and tracking.

As mobile commerce continued to rise and the performance channel proved to be an important source of revenue for Groupon on desktop, the company knew they needed to find a solution to replicate this success on mobile. With 164 million downloads of the Groupon app globally — and continuously growing — Groupon needed an efficient, reliable solution to manage mobile performance marketing and drive users in-app, which is why they turned to mobile partnerships platform Button, making it easy to:

Mobile has presented a range of unique challenges for the performance space, especially for brands wanting to drive in-app. In fact, if you think about mobile links similar to desktop — tracking will almost never sustain. Pixels don’t fire on mobile, which desktop relies on and ad blockers disable tracking, and up to 30% of mobile users block ads — to name a couple of challenges. Groupon was (and continues to) pushing to drive users in-app to complete purchases, their highest-converting channel. And more recently, workarounds are being created for the mobile web, but no solution existed that allows for accurate tracking on mobile.

Button has been able to solve for these issues, allowing Groupon to successfully run a mobile performance marketing program. For one, Button does not rely on pixels; Button Merchants like Groupon report orders directly to Button from their Order Management System using a proprietary engine that shows 99.5% accuracy. Second, the technology is not impacted by the increasing adoption of ad blockers as they are working with first party data and integrated directly with the partner. Lastly, Button’s tracking persists through the App Store, deeplink intact. Our proprietary AttendedInstall technology maintains the user’s session through the App Store or Google Play store using a variety of measures, in cooperation both with the Merchant, Publisher, along with Google and Apple themselves.

Among Button’s many partners, Groupon has proven to be an outstanding success story not only in the UK, but globally. In working with Button, Groupon now tracks app traffic much more accurately than the universal links previously used. This not only allowed Groupon to track and reward installs being driven by performance marketing partners, but it also allowed the company to track these sales through the install process, even if the user starts purchasing on mobile web and ends up buying in-app.

One key partnership Groupon focused on in 2017: UK loyalty app Quidco. Groupon wanted to find a way to improve the user experience for Quidco’s millions of loyal app users in the UK by creating a single app-to-app shopping experience. 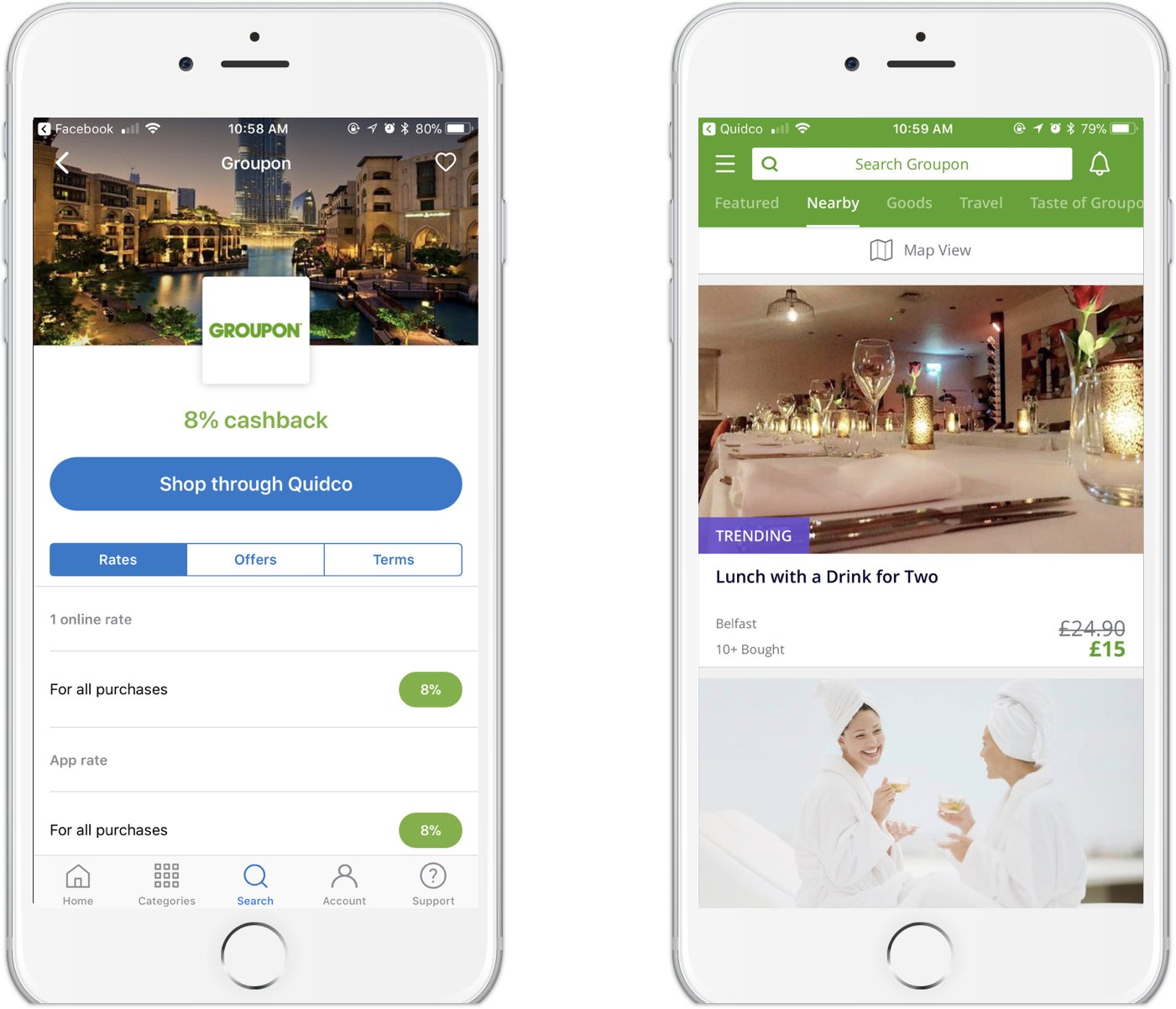 With Button’s intelligent tracking in place, Groupon is now able to send users from the Quidco app experience directly to the Groupon app with an interstitial to download via Button’s proprietary AttendedInstall technology (should the user not have the app already downloaded) — a much higher-converting channel compared to mobile web and growing the number of app installs within Quidco’s existing user base. Additionally, Groupon worked with the Quidco team to better feature Groupon’s promotion within the loyalty app. With this placement and improved user experience, users are now able to buy a Groupon and claim cashback with only four clicks, significantly reducing the number of clicks to purchase.

Through a revived app-to-app partnership with Quidco, powered by Button, Groupon has seen a substantial increase in performance. For instance, Groupon drove hundreds of thousands in net revenue in October 2017, seeing their highest-performing month in late 2017 as the partnership grew. This partnership also saw a click-to-install conversion rate of nearly 50% and a purchase conversion rate of 34%.

In looking at the year ahead, through Button’s Marketplace and technology Groupon has a pipeline to integrate with 25+ new Publishers, creating the perfect app-to-app partnership and overall user experience.

An Integral Part of the Broader Strategy

Groupon has opened up mobile as part of the company’s overall performance marketing strategy, giving publisher partners the opportunity to drive users into Groupon’s app — a higher-converting channel than the mobile web experience. Within the Quidco experience, consumers are now able to tap on the Groupon button and be intelligently routed to the destination that makes sense for each unique user — the app, app store, or mobile website. This unique feature gives Button the power to drive an incredibly high purchase and app install rate for Groupon — and higher app install rate and increased transactions means increased revenue for partners like Quidco as well.

By partnering with Button, Groupon was one of the first major retailers to open up its app to new and existing performance marketing partners in a scalable way. Ultimately, Groupon can focus on giving consumers actions, not ads, and growing partnerships with relevant Publishers to enhance and better connect their mobile strategy.

Interested in working with Groupon or seeing similar mobile growth? Check out our website to see what the Button Marketplace can do for your business!